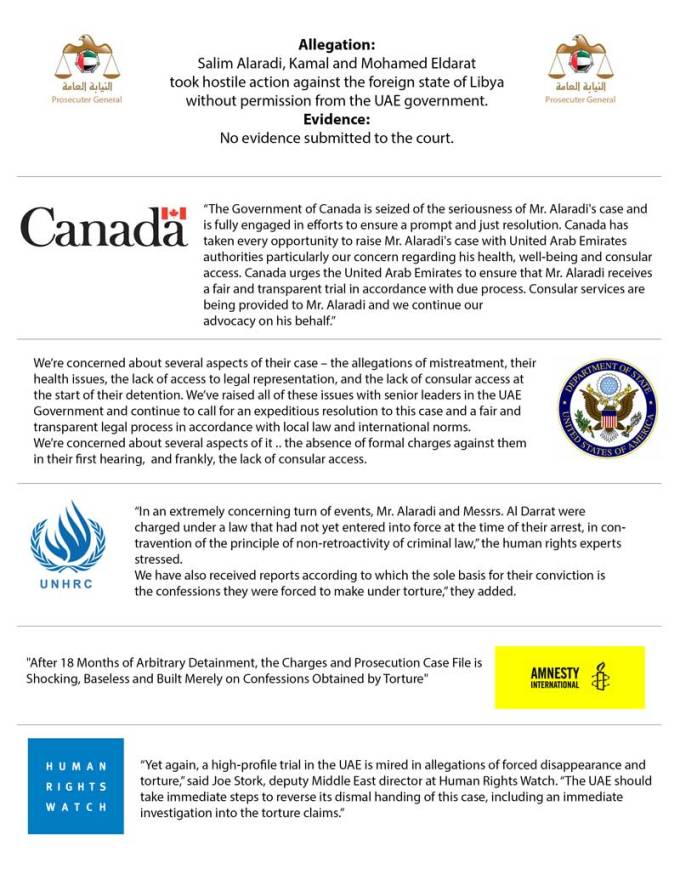 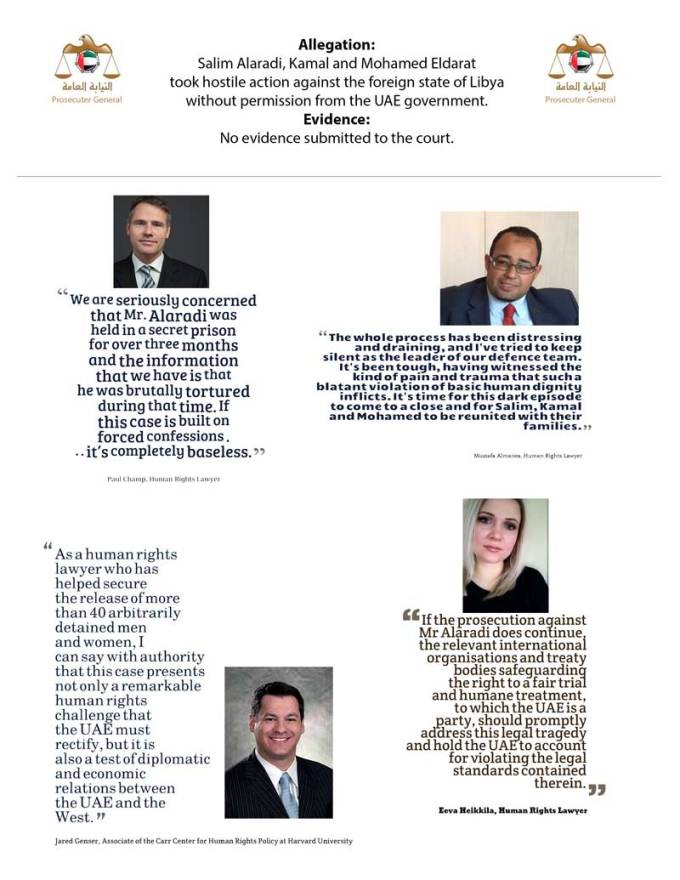 The Government of Canada is seized of the seriousness of Mr. Alaradi’s case and is fully engaged in efforts to ensure a prompt and just resolution. Canada has taken every opportunity to raise Mr. Alaradi’s case with United Arab Emirates authorities particularly our concern regarding his health, well-being and consular access. Canada urges the United Arab Emirates to ensure that Mr. Alaradi receives a fair and transparent trial in accordance with due process. Consular services are being provided to Mr. Alaradi and we continue our advocacy on his behalf.

We’re concerned about several aspects of their case – the allegations of mistreatment, their health issues, the lack of access to legal representation, and the lack of consular access at the start of their detention. We’ve raised all of these issues with senior leaders in the UAE Government and continue to call for an expeditious resolution to this case and a fair and transparent legal process in accordance with local law and international norms. We’re concerned about several aspects of it .. the absence of formal charges against them in their first hearing,  and frankly, the lack of consular access.

“In an extremely concerning turn of events, Mr. Alaradi and Messrs. Al Darrat were charged under a law that had not yet entered into force at the time of their arrest, in contravention of the principle of non-retroactivity of criminal law,” the human rights experts stressed. We have also received reports according to which the sole basis for their conviction is the confessions they were forced to make under torture,” they added.

“After 18 Months of Arbitrary Detainment, the Charges and Prosecution Case File is Shocking, Baseless and Built Merely on Confessions Obtained by Torture”

“Yet again, a high-profile trial in the UAE is mired in allegations of forced disappearance and torture,” said Joe Stork, deputy Middle East director at Human Rights Watch. “The UAE should take immediate steps to reverse its dismal handing of this case, including an immediate investigation into the torture claims.”
Andrew Slaughter MP, UK Shadow Justice Minister
“This case rings a warning bell to the UK Government, which is sending international development funds to UAE to support the development of legitimate institutions, and selling them large quantities of arms”

Jared Genser, Associate of the Carr Center for Human Rights Policy at Harvard University
As a human rights lawyer who has helped secure the release of more than 40 arbitrarily detained men and women, I can say with authority that this case presents not only a remarkable human rights challenge that the UAE must rectify, but it is also a test of diplomatic and economic relations between the UAE and the West.

Paul Champ, Human Rights Lawyer
“We are seriously concerned that Mr. Alaradi was held in a secret prison for over three months and the information that we have is that he was brutally tortured during that time. If this case is built on forced confessions . . . it’s completely baseless.”

Mustafa Almanea, Human Rights Lawyer
The whole process has been distressing and draining, and I’ve tried to keep silent as the leader of our defence team. It’s been tough, having witnessed the kind of pain and trauma that such a blatant violation of basic human dignity inflicts. It’s time for this dark episode to come to a close and for Salim, Kamal and Mohamed to be reunited with their families.

Joe Stork, deputy Middle East director at Human Rights Watch
“The UAE should take immediate steps to reverse its dismal handing of this case, including an immediate investigation into the torture claims.”

Drewery Dyke, Amnesty Researcher for the Middle East
“This case bears all the hallmarks of tens of unfair trials that have preceded it, in which detainees have reported torture, and in which the UAE government has denied defendants an effective legal defence, imprisoned prisoners of conscience and which has ultimately left in tatters its reputation in terms of human rights.”

Eeva Heikkila, Human Rights Lawyer
“If the prosecution against Mr Alaradi does continue, the relevant international organisations and treaty bodies safeguarding the right to a fair trial and humane treatment, to which the UAE is a party, should promptly address this legal tragedy and hold the UAE to account for violating the legal standards contained therein.”

Leah Schulz, Human Rights First
The questionable medical exam coupled with the new charges suggest that UAE authorities are unwilling to recognize their own mishandling of the case and acquit the businessmen. Family members worry that the prosecutor may have downgraded the charges in order to ensure a guilty verdict.

Chamber of Commerce and Industry in the UAE

We congratulate you on the occasion of Eid Al Adha, and we request your respected intervention in encouraging the UAE authorities to release the Libyan Businessmen who have been detained for over one year without any charges. We hope that you would encourage the authorities in the UAE as a sister country to fold/put behind this dark page in the mutual relationship between the two countries. 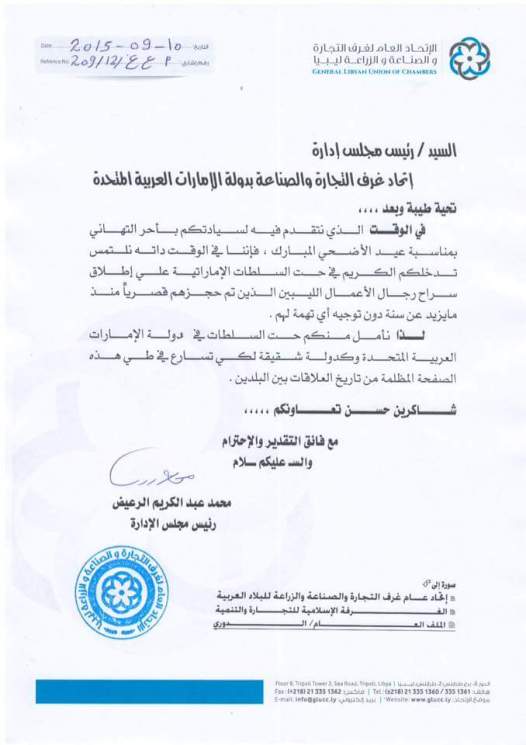 A year has passed since the detainment of the Libyan nationals who are residing in the UAE by the UAE authorities. The detainees have not been released and no information is available in relation to their cases. The Ministry of Justice is following the matter closely and with great concern. These cases contain many human right infringements without taking into account the guarantees provided for by various international covenants, treaties and agreements. In addition to being guaranteed by local legislation.

We are surprised that such acts are committed by the UAE given that there are no criminal charges, proper investigation or just trial to those detained. We see this as an indication that the UAE is taking a stance against the Arabic Spring which sought change in the regime of the Arab leadership.

The detainment of the Libyan nationals by the authorities indicate that this is a step against the Libyan revolution.

We warn the UAE from slipping into interfering in the Libyan matters in away that jeopardizes the sovereignty in Libya and its unity. We ask the leadership in the country to stay away from anything that may jeopardize the mutual relationship between the countries.

Furthermore, they should not take the side of those against the 17th of Feb revolution. We do condemn the arbitrary arrest, the torture and the inhumane treatment that has been committed in the UAE, we further ask the UAE authorities to quickly release them, and we hold them responsible for the deteriorating health of the detainees. We further consider the end of the arbitrary detention is a religious, legal, and moral responsibility of the GCC considering the UAE is a member in the council.

We further appeal to the Arabic Maghreb to perform its responsibilities toward the Libyan nationals considering that Libya is a member in the Maghreb Union, the international community through the United Nation and its Libyan mission to stand against the infringements that are committed publicly without accountability of those responsible. 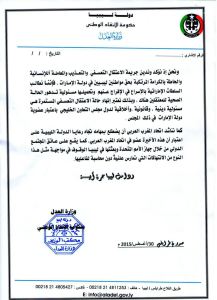 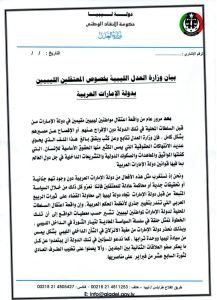