Salim Alaradi has been experiencing one wrinkle after another this week. Alaradi received an innocent verdict on Monday May 30th but was re-detained on claims of ‘administrative procedures’. After significant international public criticism and condemning further human rights violations he was released yesterday at around 10 pm Abu Dhabi time. His family and supporters cautiously celebrated through the night in cities across the world and on social media knowing that the ordeal was not over until he was home. But this morning they woke up to disappointing news that his planned travel for medical care and reuniting with this family was not going to be easy.

Alaradi was informed that he is on a travel ban list and does not have clearance to leave the country. He is currently waiting in the airport in hopes that he will be allowed to leave on the next possible flight and avoid another night without his children.

After days of insisting with Canadian officials in Ottawa that all travel arrangements should be cleared with UAE officials up front so that once released Alaradi’s medical treatment would not be delayed, today it is clear that preparations were not proactively made.

Alaradi has been waiting for hours for the Canadian government to begin operations in Ottawa this morning due to time zone difference in hopes that Prime Minister Justin Trudeau and Minister Stéphane Dion would intervene personally.

This restriction of travel is a further violation of Alaradi’s human rights. Alaradi’s Canadian lawyer Paul Champ is in communication with Canadian officials in the UAE and in Ottawa trying to escalate matters for a prompt resolution. 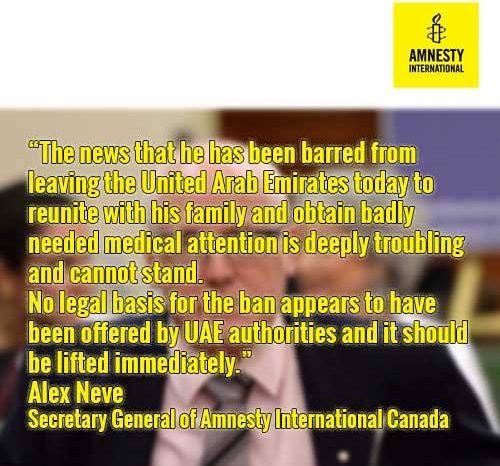