Skip to content
HomeState of Libya - General National Congress/ Presidency statement: On the continued detention of a number of Libyans in the United Arab Emirates.

General National Congress/ Presidency statement:
On the continued detention of a number of Libyans in the United Arab Emirates.

The General National Congress (GNC) renews its strong condemnation and denunciation of the continuation of the detainment of a number of Libyan nationals by the United Arab Emirates (UAE) authorities for a period of over eight months without any legal proceedings that referred to the judicial authorities, or to enable them to hire lawyers to defend them and deprive them of their rights recognized  by the International Human Rights and International covenants for Civil and Political rights.

The General National Congress emphasizes that the detainees did not commit any criminal offense, but they were arrested arbitrarily and politically without legal justification and in violation to international conventions and covenants.

The Conference also stresses the need for all countries to respect all established provisions as well as all ratified covenants and conventions and bear all the responsibilities arising therein.

The National Congress calls for the United Arab Emirates the need to release the rest of the detainees immediately, just like those who have already been released.

The Conference also calls on the Gulf Cooperation Council (GCC) States to exert their benevolent efforts to work on their release and their return to their families.

The conference calls upon all human rights organizations, regional and international, and all human rights institutions to take over this matter with a maximum attention and have their intervention for the release of the detainees who are subjected to the ugliest forms of torture and physical and psychological abuse which led to the deterioration of their health, in particular, and that some of them are suffering from life-threatening chronic diseases. 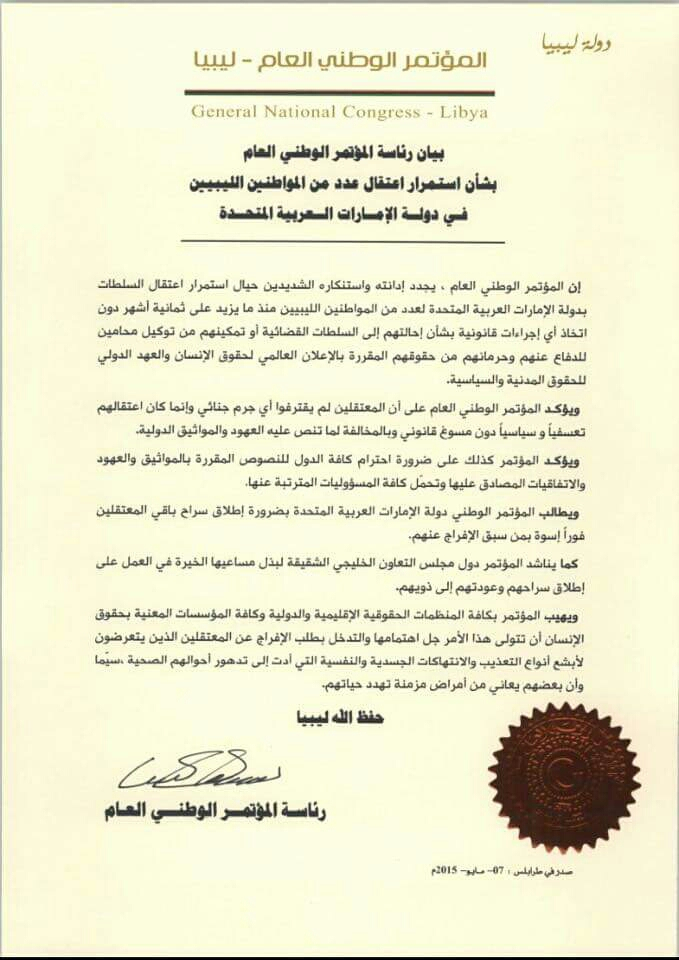