Event Title: Human Rights and Challenges Facing the Legal and Judicial Systems in the United Arab Emirates
Organized by the International Centre for Justice and Human Rights

I would like to thank Ms. Safwa Aïssa and the International Centre for Justice and Human Rights for organizing this event and inviting me.

My name is Abdelrazag Elaradi. I am here to share a humanitarian ordeal many Libyan families, including mine, have had to go through for the last nine months.
For 23 years members of our family have lived in the United Arab Emirates. Two of my brothers, Salim and Mohamad Alaradi relocated to the UAE to start an international company in home appliances. The company is still in operation today in Dubai. The UAE has been a country that both Salim and Mohamad valued and they worked very hard to contribute to its growth.

My brother, Salim, is a Libyan-born Canadian citizen. He has a beautiful family – 4 daughters: Marwa, Nur, Rayhana and Yasmeen. He has 1 son Mohammad. His children have not seen him for nearly 300 days. Marwa, who is 17 and in high school, has championed her father’s case and is fighting for his freedom. Nur and Mohammad cannot comprehend what they have been told about their father. They suffer in sadness each day. Rayhana and Yasmeen believe their father is on an extended business trip.

On August 28, 2014 both Mohammad and Salim were approached separately by the UAE State Security Agency. They were questioned, their properties were searched without a warrant, and they were arrested on the spot. No accusations or charges were provided to their families at the time of arrest. Salim was on an annual vacation in Dubai with his elderly mother, wife and children when he was arrested.

The UAE denied having detained my brothers. Our family did not know their whereabouts or if they were alive until we received a call after two months and nine days. Salim called his wife and informed her that he was alive and he asked about his mother and his children and the call was ended.

Within a similar period, 8 other Libyan businessmen were detained in a systematic approach. Soon after, Amnesty International issued an Urgent Action and Human Rights Watch issued a report on the detainments. All of the families received no response as to why their loved ones were detained.
All of the 10 businessmen were residents of the UAE for decades, extremely respected in their professional fields, law-abiding residents and had no known political involvement or affiliations in the UAE or Libya. Amnesty International and Human Rights Watch reported that the detainments are considered enforced disappearance and arbitrary under international law.

Our family remained without communication with both Salim and Mohammad until December 2014. Randomly, Mohammad and three other detainees were released, placed on an airplane and deported out of the UAE. My brother Mohammad, a man who has invested extensively in the UAE, lives with four unanswered questions:
• For what reason he was detained?
• Why he was treated in this manner?
• Why he was deported from the country?
• And why his brother is still detained?

During this initial period the detainees were held in an undisclosed location. In January 2015 Salim was relocated to Al-Wathba Prison in Abu Dhabi. Since then his wife, Aliya, was allowed to visit him once and has received only two phone calls. During the visit an officer stood near them within ear shot and was listening to their conversation. It is also very clear that the two phone calls were monitored.

I am very concerned about my brother Salim’s health. Salim suffers from serious health conditions, some pre-existent and others due to prison conditions. He has high blood pressure, asthma, high cholesterol and vulnerabilities due to an open-heart surgery. Salim has had major weight loss, eye infection and bronchitis. Our most serious concern is that he has developed worse conditions in his back related to the disks in his spine from sleeping on the concrete floor for months and we know that he is in continuous extreme pain.

Salim has been denied access to medical aid for the majority of his time in detention with the exception of a single examination from a specialist after nine months of the detainment.
Salim’s most basic human rights have been violated.
• He was held in incommunicado detention for four months,
• he has not been provided with legal representation – let alone legal representation of his own choice,
• he has not been provided adequate access to his family – I am not a lawyer but I cannot comprehend that one visit with guards in the room and three monitored phone calls in nine months can be considered adequate access,
• and he has been denied adequate medical care – after months of requesting a specialist for his back he was given one examination last month in which he can only be examined for one issue.

Salim remained in solitary confinement for the first 114 days of his detainment and our family is also very concerned about his safety and that he has been subjected to ill treatment.

I don’t know why Salim was arrested. Many people have said his detainment is politically motivated. But what I do know for sure is that after 290 days, he has still not been provided with the reasons for his arrest or being given the opportunity to challenge his on-going detention.

Salim’s detainment is renewed every 30 days without due process. At no time during those renewals has any evidence been presented, or have any allegations been formally made. Although I know the UAE Constitution and laws does not allow for such detainment and treatment, it appears they were not applied to Salim and Mohammad.

The Canadian mission has been helping our family from the start with consular assistance. The Libyan mission recently visited Salim and the other detainees for the first time. Our family appreciates any effort made to date on behalf of Salim. But his medical condition is worsening, his health is in jeopardy, and he is still not home with his children. This ordeal needs to be resolved urgently.

Our family is hoping Canada and Libya will continue to work through diplomatic channels to bring this situation to an end. I have come to Geneva on behalf of Salim and his family to meet with the Special Procedures branch of the Office of the High Commissioner for Human Rights. 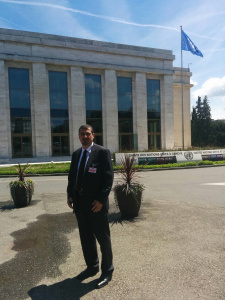 Finally, because of High School exams, Salim’s daughter – Marwa - could not be here herself but she asked me to share her words with you.

“My name is Marwa Alaradi. I am 17 years old. My last memory with my father was sipping our hot chocolate at the café in Atlantis resort in Dubai. It was my birthday and he told me that he was proud of me. This was the last day I saw my father.

I have many questions for the people who took my father. I spent seven months hoping they would let him go. But now I have decided to fight for my father’s freedom.
I fear for my dad’s life and he needs to come home. I hope the United Nations will help me reunite my family again.”

I leave you with Marwa’s words - Thank you.