Skip to content
HomeUAE Re-Election to the UN HRC

The Libyan Association for Victims of Torture and Enforced Disappearance in the UAE has raised concerns following the announcement of the United Arab Emirate’s re-election to the UN Human Rights Council that was made soon after the UN Human Rights Council Special Rapporteur on Torture issued a request to visit the UAE. Mr. Jaun Mendez issued this request on the basis of credible and serious evidence of systematic torture taking place in secret prisons, including evidence related to the Libyan Businessmen.

LAVTEDU has emailed 184 Ambassadors to the United Nations from all member and observer states.

The UAE’s commitment to uphold human rights is highly question. In the last several years, the UAE has banned Amnesty, Human Rights Watch and other experts and activists from entering the country.  It has consistently disregarded UN conventions that it is a signed party to.  The UAE is hiding its human rights violations behind the façade of economy, brands and skyscrapers.

We call on the UN HRC to place a higher level of standards and expectations on those states elected to the council. The UAE must be encouraged to expedite human rights reforms.  This should begin with the immediate and unconditional release of the Libyan businessmen whom have been kidnapped, arbitrarily detained and tortured in UAE secret prisons. It should be followed by the immediate closure of all secret prisons indefinitely and the halt of unlawful torture used against detainees.

In light of the UAE’s re-election to the HRC, in good faith the UAE should announce its acceptance of the UN Special Rapporteur’s request to visit the UAE in the immediate future. 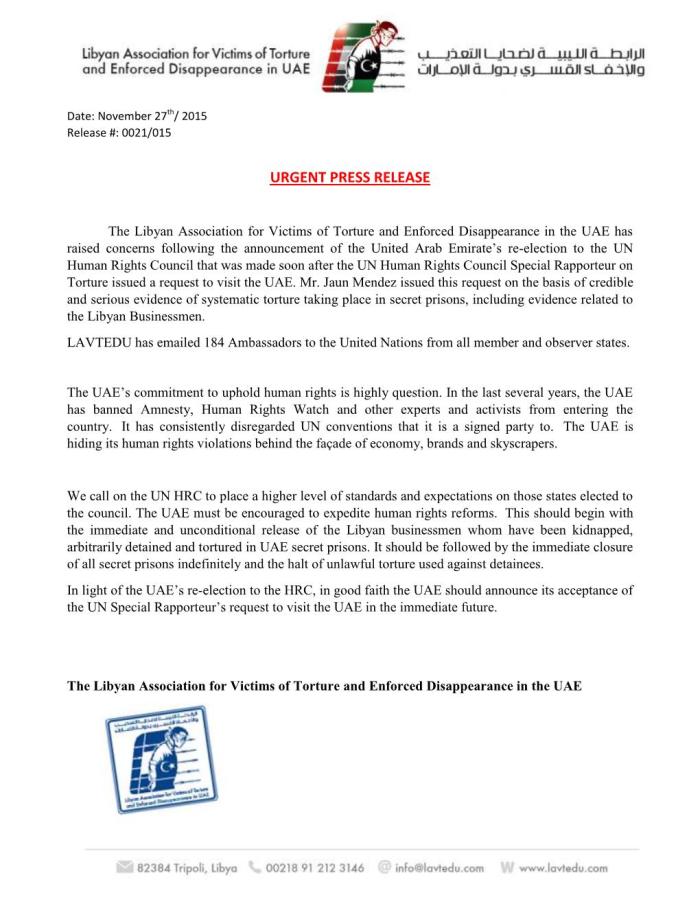