“My father is a Canadian citizen.  He is a good man.  A good father.  A deserves to come back home.” - Marwa Alaradi

It was a festive weekend for many Canadian Muslims — as the holy month of Ramadan came to a close, and family members gathered to celebrate … and break fast.

But one family, in Windsor, Ontario, was missing an important member — Salim Alaradi is a Canadian-Libyan citizen … a husband, and a father of five. 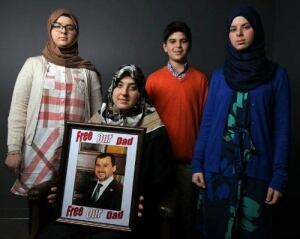 Salim Alaradi’s family says that for nearly a year now, he has been detained, far away from home, in the United Arab Emirates, or UAE.

The family was on vacation in Dubai, last August.  And that’s the last time that 17-year-old Marwa Alaradi saw her father.

Marwa Alaradi joined us from Windsor.

The Current requested an interview with the UAE’s Ambassador to Canada. He was unavailable.

We also contacted Foreign Affairs, Trade and Development Canada and received a statement which reads:

“We are aware of a Canadian citizen detained in the United Arab Emirates. Consular services are being provided to the Canadian citizen. Consular officials are in contact with the individual’s family as well as local authorities in the United Arab Emirates. To protect the privacy of the individual concerned, further details on this case cannot be released.”

​Salim Alaradi isn’t the only person with Libyan citizenship being held in the UAE. For more, we were joined by Drewery Dyke. He is a UAE and Gulf researcher with Amnesty International. He was in London, England.