At the onset of the trial that did not last more than 10 minutes, Alaradi’s lawyers requested a torture forensic medical assessment by an independent physician. The prosecution objected but the judge overruled and agreed to the request.

“The fact that the State Security judge ordered a medical examination over the objections of the prosecutor is obviously a good sign. This could be a sign that the international attention and scrutiny is finally having an impact,” explains Paul Champ, Alaradi’s Canadian lawyer.

The legal team also requested that the judge subpoena the interrogators for questioning.  The judge also accepted this request.

Alaradi was extremely emotional after seeing the Canadian Ambassador and his nephew in the court room. It was the first time he has seen a family member in over 11 months. Alaradi was escorted into a glass cage with the other defendants. Alaradi requested to speak and asked the judge that he be given more than 15 minutes a week for phone call privilege so that he can speak to both his family and his lawyer. Unlike most detainees who are allowed an hour or more for calling family, Alaradi has been limited to 15 minutes.

Today, the United Nations issued a statement ‘condemning’ the trial on the basis of arbitrary detention, violation of rights to health, credible evidence of torture, extremely limited access to their lawyers, and a prosecution merely based on the confessions they were forced to make under torture. “The joint statement issued by the UN Special Rapporteur on Torture and other relevant Special Rapporteurs is an exceptional action by the UN human rights system. This could be a legal turning point,” says Champ.

“In addition to Salim Alaradi there are Kamal Eldarat and his son, Mohamed, American citizens of Libyan origin, who made the mistake of doing business in Dubai.  They are innocent of any wrongdoing.   We are confident that a fair-minded court will almost certainly acquit them.  Both the law and the facts are on their side,” says Greg Craig, US attorney representing the American nationals and a former White House Counsel under President Barack Obama.

The overwhelming definite conclusion of the UN Expert and opinions offered by legal experts including Geoffrey Robertson QC, a former UN judge, has drawn the attention of international media.

“This family day I spend time with my dad, not at home, not in prison, not online, but advocating for his freedom. The UN has clearly demonstrated that each of my father’s basic human rights has been violated and he has no chance for a fair trial. I have been saying this all along and I call on the Canadian government to intervene for his freedom. The day my father is free will be my family day,” says Marwa Alaradi, Alaradi’s eldest Canadian daughter. 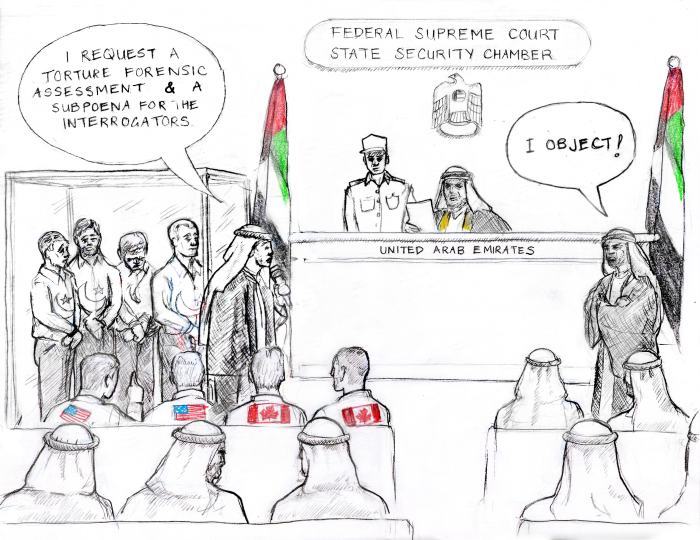 Commissioned by The Libyan Association for Victims of Torture and Enforced Disappearance in the UAE
May be re-used for free, without the need to ask for permission (http://lavtedu.com)

For comments about the UN News Release:

For comments about the case and the UN Opinion: